Academy of Finance and Business Vistula in Warsaw

University of Warmia and Mazury in Olsztyn

Medical University of Gdańsk (MUG) is the largest medical university in northern Poland, located in one of the most beautiful cities in Europe with an old town and beautiful sandy beaches. 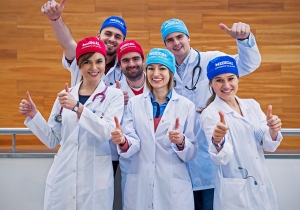 Medical University of Gdańsk (MUG) is the largest medical university in northern Poland, located in one of the most beautiful cities in Europe with an old town and beautiful sandy beaches. MUG educates nearly 6000 undergraduate and postgraduate students at four Faculties: Faculty of Health Sciences, Faculty of Medicine, Faculty of Pharmacy and The Intercollegiate Faculty of Biotechnology.

The scientific excellence of the MUG was confirmed in 2012 when the Polish Ministry of Science and Higher Education recognized the Faculty of Pharmacy with Subfaculty of Laboratory Medicine as one of 6 Leading National Research Centre (KNOW).
MUG is one of 34 Polish universities that participated in this year’s version of U-Multirank. Other local universities also appear in the ranking, however the MUG surpassed them in terms of teaching quality, research funding, knowledge transfer and the number of foreign students. In terms of teaching, MUG was ranked 16th of nearly 170 universities from around the world and ahead of all other Polish medical universities.
The MUG ranked 10th among all the Polish universities in the 2015 edition of the ranking conducted by the “Perspektywy”. In the last 4 years the MUG advanced from the 20th to 10th place in that ranking.

International students constitute of 14% of MUG students and represent more than half of all international students in Gdańsk. MUG organizes special week of introductory activities for first-year medical students – to introduce them to medical school life and to formally induct into the profession of medicine. The dormitories are situated on campus, very close to the classroom buildings. The campus consists of 4 dormitories with space for 1000 students, the student club “Medyk”, a grocery shop and a photocopy shop. There is also a canteen, which offers meals at student-friendly prices. All the dormitories are connected to the Internet.

MUG constantly modernizes its clinical and teaching facilities. In the end of 2011 the University Clinical Centre has been successfully modernized. Our main hospital – the MUG Invasive Medicine Centre is one of the most modern hospitals in Europe. New investment MUG Non-Invasive Medicine Centre will be started in September 2015 and will be also co-financed by state budget. Together, this will be one of the largest and newest hospital complexes in Poland.

The MUG cooperates with more than 50 universities and scientific centers around the world, i.e. conducts the exchange of students and faculty in the framework of the Erasmus+ programme and is an active member of European organizations – ScanBalt and Baltic Sea Region University Network.

Students of the MUG Faculty of Medicine frequently earned the Red Rose Award, either individually or as part of student scientific clubs. In 2015, Gabrielle Karpinsky, VI year English Division student won the award for best student in the Pomorskie province and the English Division Pediatric Oncology Scientific Circle at the MUG Department and Clinic of Pediatrics, Hematology and Oncology won in the Best Student Scientific Circle category. It was the first time in the Award’s history that English Division students, individually and as a Student Circle, won in both categories. Whereas the 1999 edition was the last time when a student and a Circle from the same university won both awards. Gabrielle Karpinsky also won the prestigious nationwide Interstudent contest in the master degree category.

MUG cooperation with the business world is also developing constantly. Technology transfer is managed by Business Point, a unit established in cooperation with local technology parks in Gdańsk and Gdynia. Development of scientific projects is supported in order to implement the research results into the market. At this time, the MUG owns 25 patents and the Innovation and Technology Office is constantly developing to help our scientists protect their knowledge. The MUG focuses its research on innovative medications and new clinical treatment of diseases that are currently incurable.